I am not an economist, so feel free to take these comments with a grain or two of salt. But I have a background in physics, and think I have a good enough grasp of calculus to make some observations about a graph. 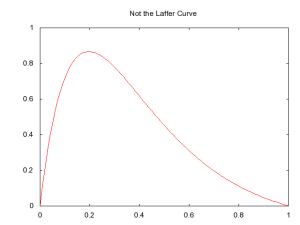 Laffer curve is a qualitative description of government revenues as a function of tax rates. Wikipedia suggests that there are some sophisticated economists that doubt its existence. I, being less sophisticated, regard it as self evident. At zero tax rates, the revenues would be nearly zero – except for tariffs (which are taxes on trade) and legal fines and maybe some other fees (taxes) such as liquor stamps.  100% tax rates result in essentially a slave state or barter society.  Revenues would also be low as there in no incentive to generate an income.  Citizens are completely dependent on government for basic needs.  In between revenues will be higher, and there will be [at least] one maximum. Laffer skirts the issue of the maximum, noting that reducing taxes reduces income less than expected, and presumably, raising taxes produces less income.  Since there is no quantitative formulation of the Laffer Curve, any conclusions can only be qualitative. END_OF_DOCUMENT_TOKEN_TO_BE_REPLACED

Well, nearly but not exactly.

END_OF_DOCUMENT_TOKEN_TO_BE_REPLACED

NASA Statement on the Russian Meteorite

According to NASA scientists, the trajectory of the Russian meteorite was significantly different than the trajectory of the asteroid 2012 DA14, making it a completely unrelated object. Information is still being collected about the Russian meteorite and analysis is preliminary at this point. In videos of the meteor, it is seen to pass from left to right in front of the rising sun, which means it was traveling from north to south. Asteroid DA14’s trajectory is in the opposite direction, from south to north.

But it sure is one heck of a coincidence!!

You have to wonder if it is a chunk off DA14, but the arguement about the direction of motion is a strong one.

via I Can Haz Cheezberger? 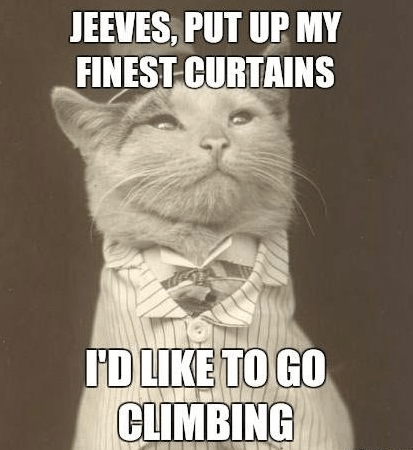 Make sure to hang them artfully, for maximum destruction.

One of the most memorable verses in Job is the Easter refrain, “I know that my redeemer lives …”. It seemingly appears as a non-sequitur in the midst of Job’s contemplation of death. However, we should remember that the “Kinsman Redeemer” is an important Old Testament concept. END_OF_DOCUMENT_TOKEN_TO_BE_REPLACED

I want to mark this web site.  Atmospheric Circulation

I have observed, from balloon flight planning and other projects that the mid-latitude  jet stream seems to divide the lower (polar?) tropopause, and the higher mid-latitude tropopause.  I think this goes part way to an explanation and expect to return to it to try to understand it.